Henkel introduces the new LOCTITE® Pulse brand at AUTOMA 2021 – “OIL & GAS AUTOMATION AND DIGITALIZATION CONGRESS 2021”.
As a leading global manufacturer of adhesives, sealants and functional coatings, Henkel is expanding its offering with LOCTITE® Pulse, a novel portfolio of IIOT solutions which are designed to minimize plant downtime, save maintenance costs and increase safety and sustainability. Following the motto “Engineered by Henkel – Developed by Cosmo Consult”, the solutions which are based on innovative sensor technology are engineered and sold by Henkel and software implemented by Cosmo Consult.

At this year’s world-wide congress, 445 participants from 173 companies were represented by 67 speakers.

The first product under Henkel’s new LOCTITE® Pulse brand, the so-called “Smart Flange” is an intelligent leakage monitoring system for flanges and will soon be launched on the market. It has already been tested and referenced by well-known customers in the oil refinery and chemical industries. Further solutions are already under development and will be rolled out successively globally in the coming months and years. The LOCTITE Pulse app which runs on the AZURE IoT Cloud, was software implemented by Cosmo Consult TIC. It is based on the COSMO apps Smart Asset and Object Tracker and is connected to novel sensors applied to industrial equipment and components. It brings via a mobile app IoT & Smart Home functionality for predictive maintenance to industry.

Henkel and Cosmo Consult are working in a long-term strategic partnership that goes far beyond the mere development of software solutions and optimally combines the strengths of both companies. While Cosmo Consult has extensive expertise in software development, particularly for the oil, gas and chemical industries, Henkel contributes both its application and chemical expertise built up over decades and new analytics expertise. 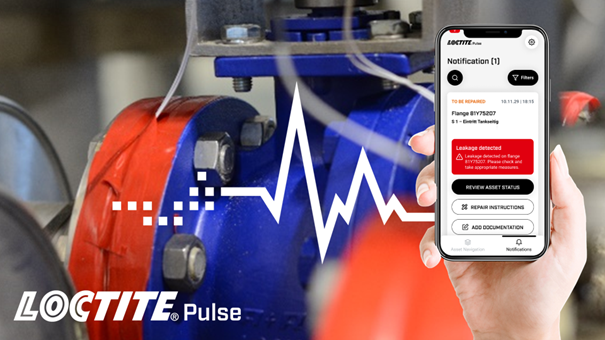 Henkel is a partner in the “Digital Construction Site – Smart Industry Park” initiative led by Cosmo Consult and the Fraunhofer IFF.